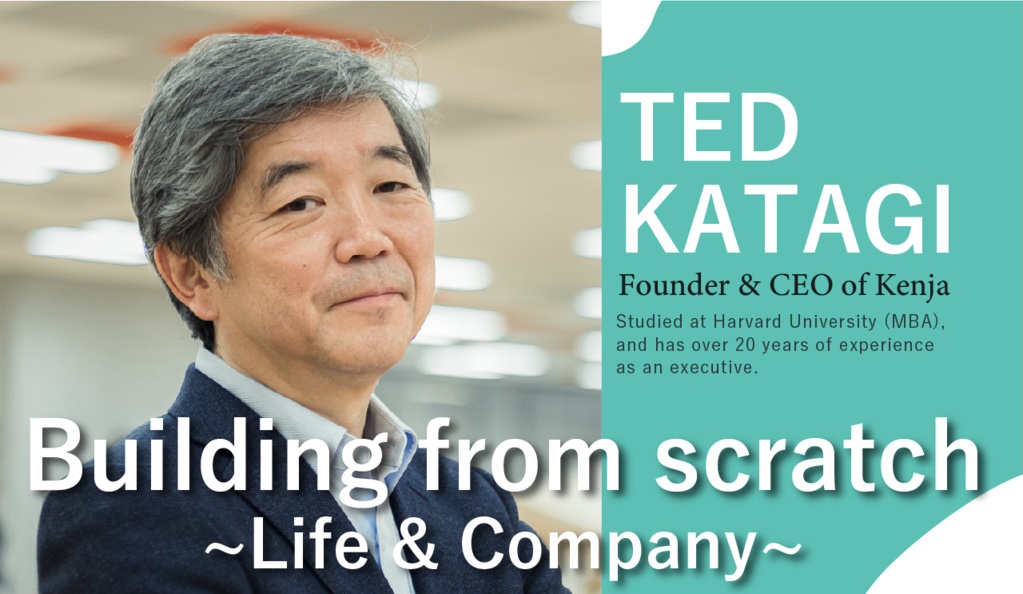 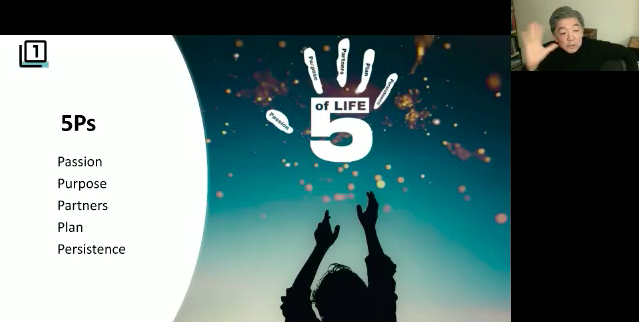 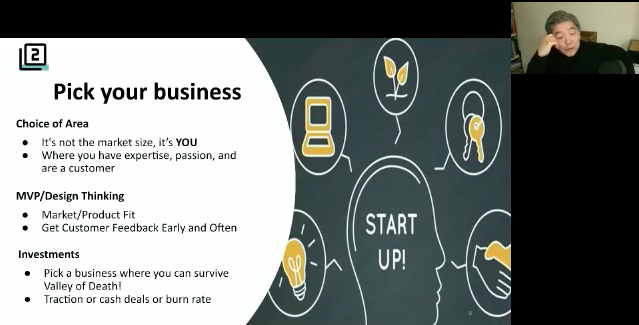 [イベント報告: Your Map and Compass] 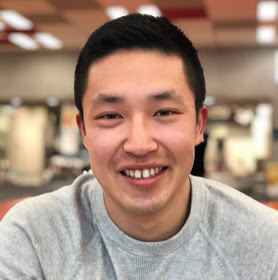 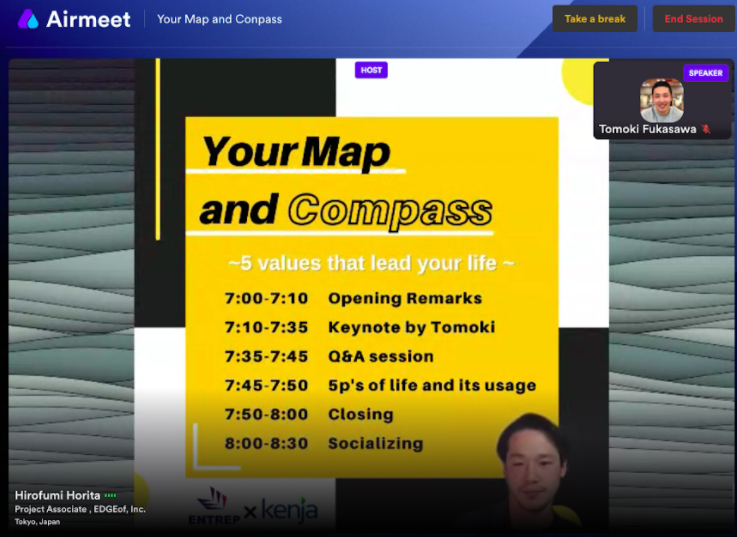 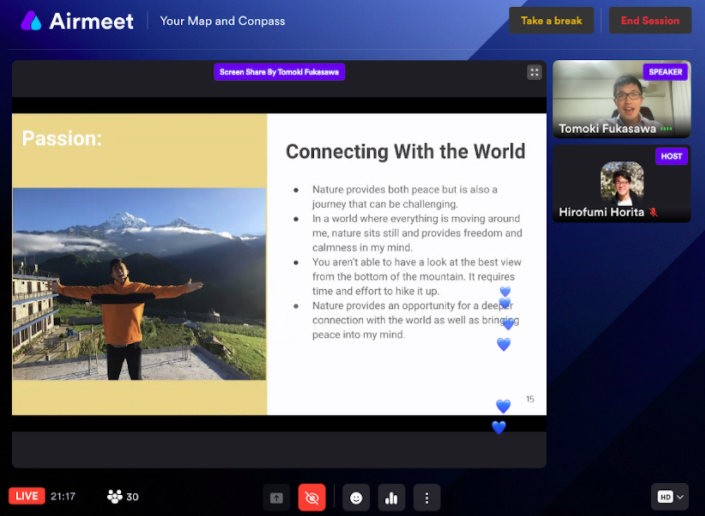 In ENTREP’s second collaboration event with Kenja, participants had the opportunity to hear the CEO of Kenja, Ted Katagi, discuss his journey in business and share his views on how one can become a successful entrepreneur. The event was held on Airmeets on April 7th, 2021, and welcomed an enthusiastic group of over 35 participants from inside and outside the International Christian University (ICU) community.

The event consisted of a presentation by Mr. Katagi about the fundamentals of the entrepreneurial mindset and the first steps of starting one’s own business, a general Q&A session, and a post-event networking session, in which students could move around freely between different virtual tables in order to chat, make new friends, and ask further questions to the guest speaker.

Mr. Katagi, despite being an entrepreneur and CEO, did not start his career as an entrepreneur. His career in business began in Enterprise Sales for IBM, and he subsequently assumed a variety of positions, including Director of Strategy for AirTouch, Chief Marketing Officer for Vodafone Japan, Global Head of Commercial Strategy for Vodafone Japan, and COO of Picsel Software. He has 20 years of experience as an executive.

Yet, at the age of 48, Mr. Katagi returned to fulfilling his childhood dream by starting his own company, Kenja, which was founded in 2011. For Mr. Katagi, starting his own business was his purpose, or “North Star”. He encourages us to follow our own North Stars, which we can achieve through understanding and living out the 5Ps. These include Passion, Purpose, Partners, Plan, and Persistence.

Passion was a core concept in Mr. Katagi’s presentation. He emphasized how it is unfortunate that many people in Japanese society do not find Passion in their work. “If you’re going to spend that much time at work, then shouldn’t you enjoy it?” Mr. Katagi said.

Passion ties into Purpose, which is a more long term goal. “The most important thing about purpose and the 5Ps is that you should have a reason to be here. Everyone has a special thing that they can contribute to the world. Find what that is, and then find a way to express that,” Mr. Katagi said. Mr. Katagi recognizes that Purpose is more difficult to grasp than Passion, and he therefore encourages people to find their Purpose in light of the hints they receive through understanding their Passions first.

Mr. Katagi shared that achieving one’s North Star requires us to seek Partners. He raised a practical approach to seeking Partners when he stated, “I tell my students...Who are the five top people that you want to meet?... If you do that, then the next thing is what can you do for them?” According to Mr. Katagi, it is a good idea to “think of a win-win” when approaching a mentor.

The fourth principle in the 5Ps is Plan. A key idea that Mr. Katagi highlighted regarding Plan was that a Plan does not have to be perfect from the beginning. He stated, “Most people are going to plan a trip for one week. But they’re not going to plan their life. Isn’t that almost reverse? A longer the trip is don't you have it planned a little bit more? The problem is that people think it's too difficult… The plan is not something that you're going to have correctly the first time. You’re just going to try to do a plan, try to stay loose on it, but have a plan.”

Mr. Katagi also spoke on Persistence throughout his presentation. He spoke of the importance of not only reflecting on one’s passion, but also the power of putting the image of the goal in one’s mind. He stated, “And if you really want to get your purpose done, promise yourself you’ll spend ten minutes a day on your purpose. Which is much better than every three years spending a week on it… If you’re constantly thinking about your purpose everyday...That gets you really on track.”

With a deeper understanding and an implementation of these 5Ps, one has the foundation to start on their entrepreneurial journey. Hopefully, we can be part of the community that chooses to take action by implementing these ideas. Let’s understand our Passions and discern our Purpose. Let’s think about potential Partners. Let’s have a loose Plan and be Persistent. Take 10 minutes reflecting on your 5Ps today!

[Event Report: Your Map and Compass]

On March 11th, 2021, Entrep collaborated with Kenja to hold an online event that allowed participants to learn about values that would help them lead a meaningful life.

Kenja is a software company founded in 2011 that offers a content management system dedicated to assisting businesses. It is an emerging company that is unique in Japan, and it is increasing its international presence. More recently, Kenja has been growing further by utilizing blockchains. 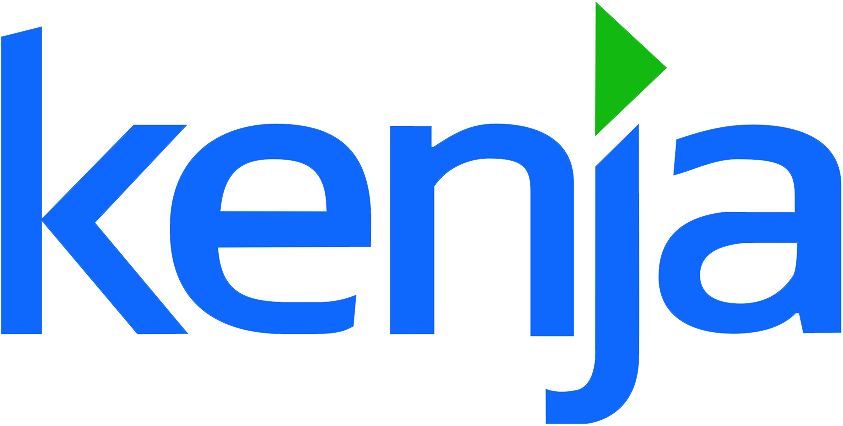 In this event, Kenja was represented by Tomoki Fukasawa, who started his sales career at Kenja a year ago. With Kenja, Tomoki was able to develop further and nurture his passions, which include connecting with people and having strong business connections. In addition to Kenja, Tomoki grows his business skills through his participation in the Japan Market Expansion Competition.

The event was kicked off with an introduction by Entrep member Stiven Hirofumi. The torch was then passed to Tomoki, who talked about his career path, mentorship, and key values that he himself embraces.

These values are called the 5Ps, which consist of Passion, Purpose, Partners, Plan, and Persistence. Kenja takes all of these values to heart in order to uphold one of its core missions, which is to respect the goals of each and every member of the company. Kenja saw this event as an opportunity to share the 5Ps as well as the entrepreneurial mindset with ICU students, who could use Tomoki’s advice as inspiration to build their own life plans.

On the topic of mentorship, one key takeaway from Tomoki’s talk was the idea of seizing opportunities. Tomoki emphasized that mentors are out there, and sometimes it is just a matter of taking the initiative to approach one. Tomoki also talked about finding potential mentors by asking yourself questions such as “What industry are they in?”, and “How will I meet them?”.

After Tomoki’s presentation, there was time for questions. This was followed by a networking session, where students could network not only with each other but with Tomoki and other Kenja members.

Reflecting upon the successful event, participants had a plethora of positive feedback to give. One stated, “It was a very enlightening talk, and it made me want to have a specific long term plan.” Another participant stated that they were already starting to plan their own 5Ps. Furthermore, the meeting application that was used, called Airmeet, was applauded for being very easy to use and great for interacting with others. 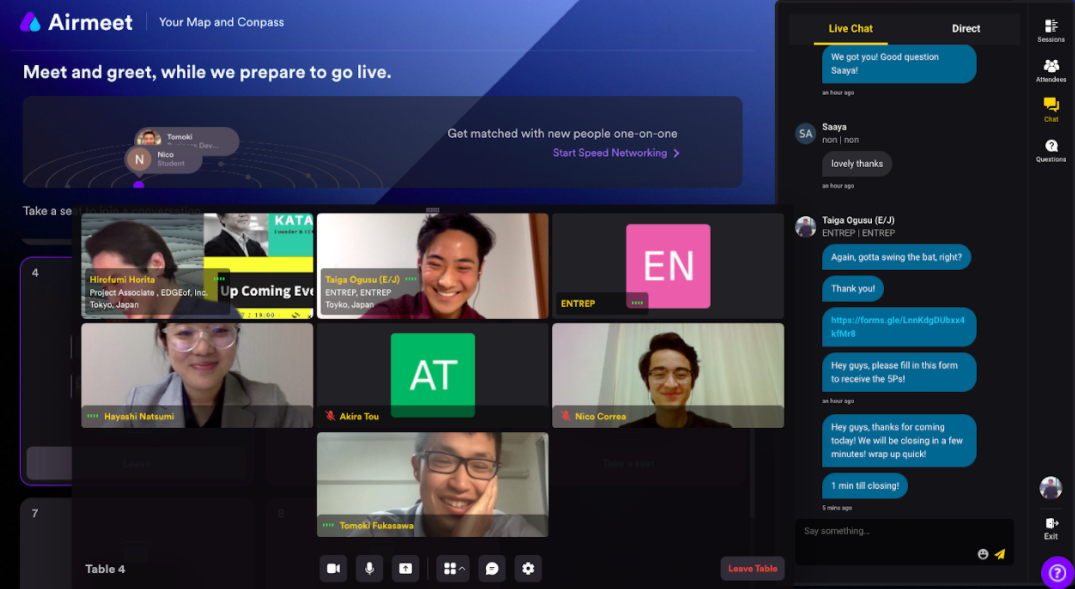 Members of Entrep & Kenja interact on Airmeets after the event.

On April 7th at 19:00, the ICU community will have another opportunity to learn from Kenja, through another collaboration event, which will feature guest speaker Ted Katagi. Ted is the founder and CEO of Kenja, has 20 years of experience as an executive, and is a mentor figure to Tomoki. It will be an opportunity to deepen one’s understanding of the 5Ps. 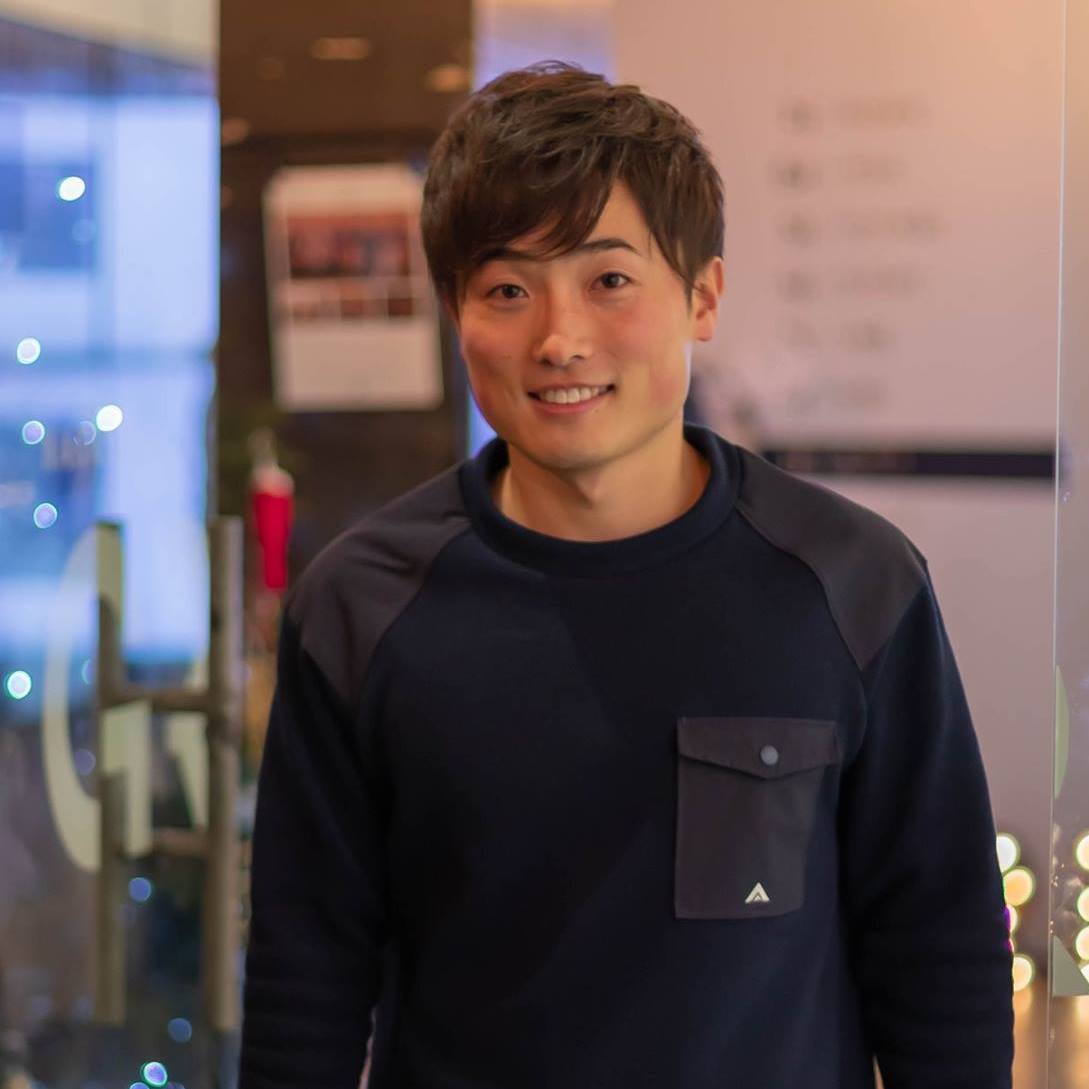 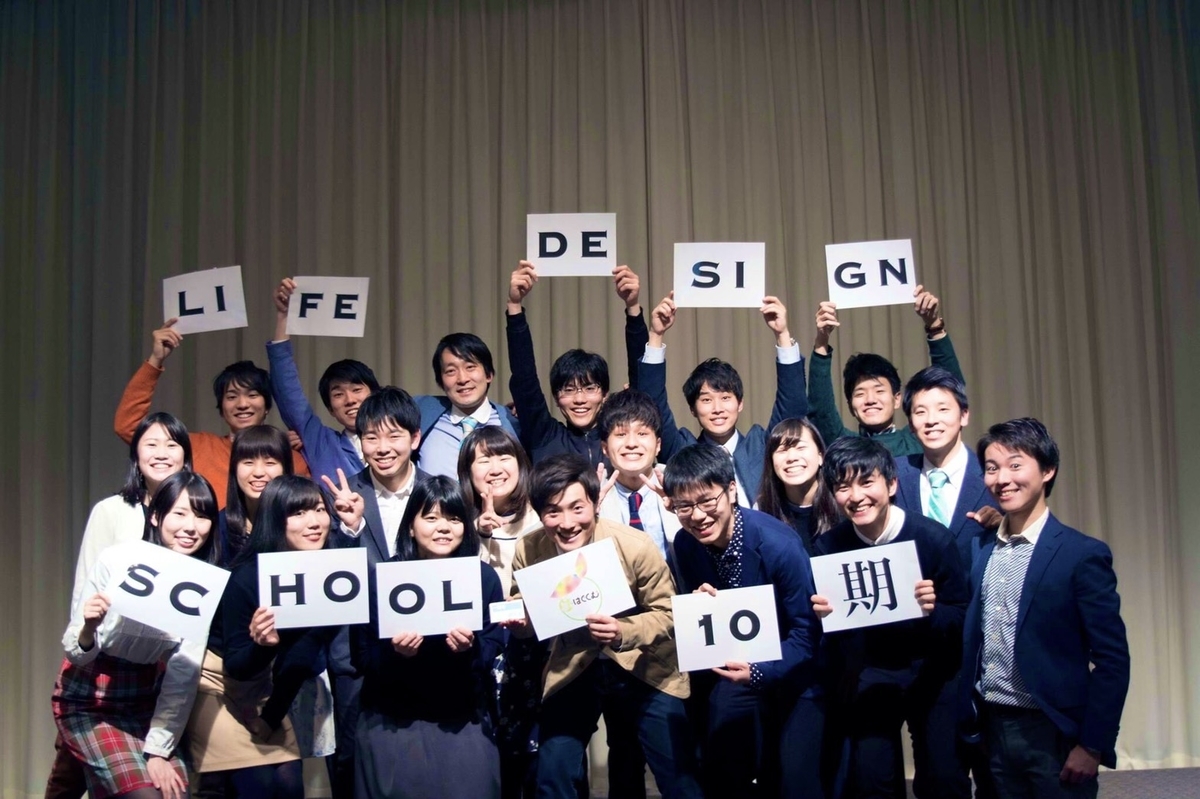